Designing and Building a UV Sanitizer

“Pandemic,” it’s a scary word to hear. Especially when it’s accompanied by panic-buying of canned goods, pasta, and the disappearance of most disinfecting products from stores. As soon as various media outlets started filling up their news cycles with stories about the coronavirus, alcohol, hand sanitizer, and other disinfectants flew off the shelves. Panic-buying left the most vulnerable without essential goods needed to protect themselves, with little recourse available. Facing such a bleak scenario, one such person turned to their son, Md, a BotFactory applications engineer for help. 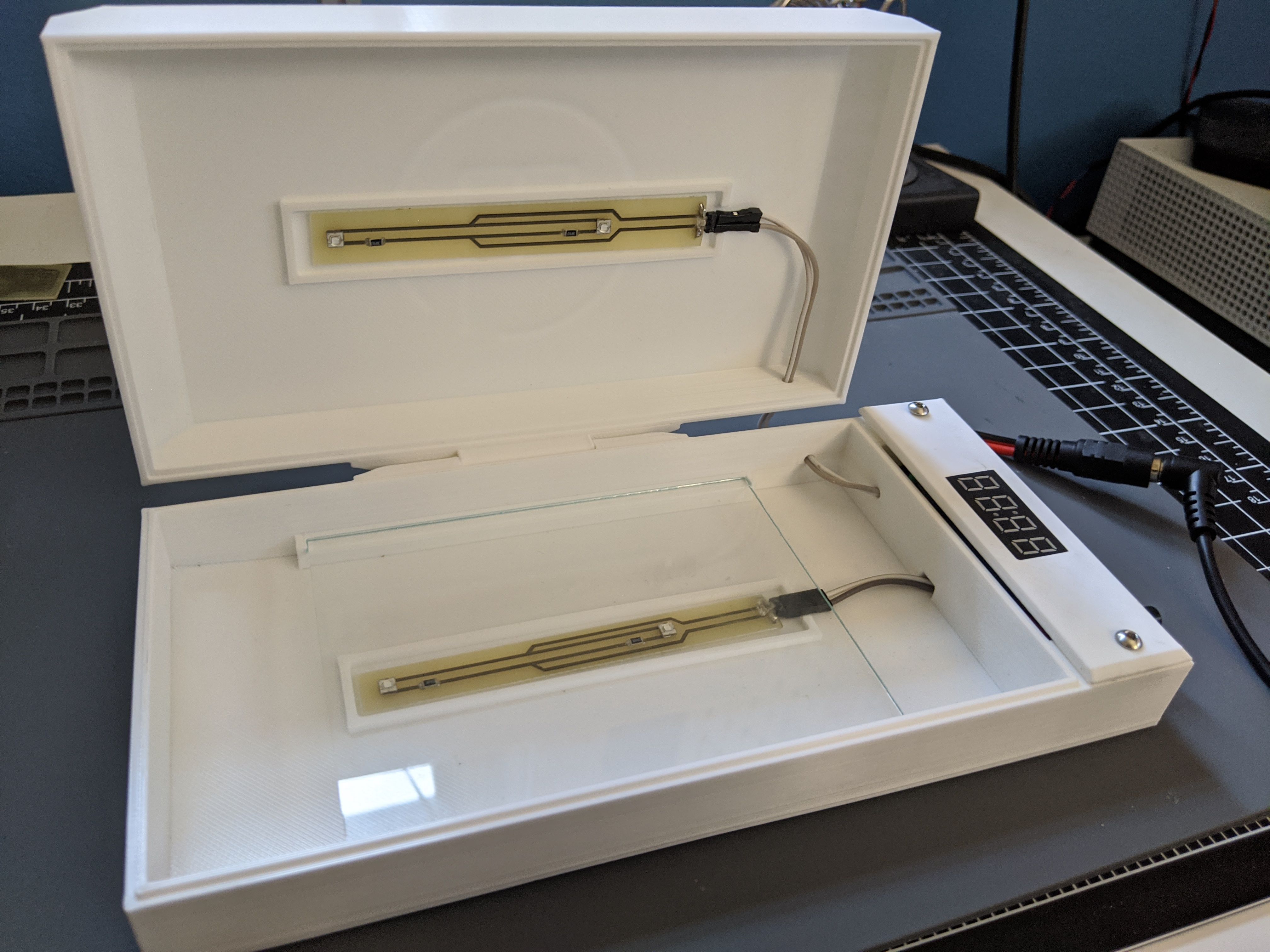 “Hey son, when you’re done removing the viruses from my computer, can you remove the viruses from my phone too?” Asked Md’s father. “Sure dad, gimme a few minutes, this will take a little time since we don’t have any disinfectant left,” responded Md. Both of them looked at each other quizzically. Then Md was struck with a brilliant idea; a bright idea, if you will. Ultraviolet light, in particular UVC light, is a shortwave ultraviolet light which can kill germs. Md thought to himself, “This would be a great way to clean items without any disinfectants.” The added benefit to using UV light instead of the highly sought-after cleaners, was that there was no need to go to the store or to lessen the availability of such products for others. Md was approached with a problem and delivered a very efficient and socially responsible (thinking of you Grandma!) solution.

Want to Make Your Own UV Sanitizer?

Md has a number of tools at home that would make him the envy of many engineers during the COVID-19 lockdown: a 3D printer, an adjustable DC power supply, a soldering station, and a BotFactory SV2 desktop PCB printer. Utilizing their HomeLabs allows hardware and applications engineers like Md to prototype and assemble Printed Circuit Boards (PCBs) automatically while at home. Employing the tools he had close at hand, he was able to turn his idea into an actual device in record time to keep his things germ-free.

Redesign on the Fly

As anyone with first hand experience will tell you, the only thing more dangerous than a bored engineer is a bored engineer with an idea. Md had a big idea, making him dangerous indeed, especially since he has a well-equipped lab next to his nightstand. Md started building his UV sanitizer in KiCAD where he designed the circuit and the PCB. After laying out his PCB he was able to print it out with his BotFactory SV2 and test it, troubleshooting any problems that arose. Md placed all the components he had bought online from electronic component distributors, who were still fulfilling orders, and powered his board. He turned it on and NOTHING happened. Md muttered something under his breath, cursing the electronics gods. ”Yet why do I say this? I have myself been blasted in these hopes, yet another may succeed,” said Md as he went to consult with Carlos, CTO of BotFactory and fellow engineer. After talking with Carlos (or affectionately called Hardware Gandalf), Md re-worked his board and printed out another version of his design, all within the span of a few hours. 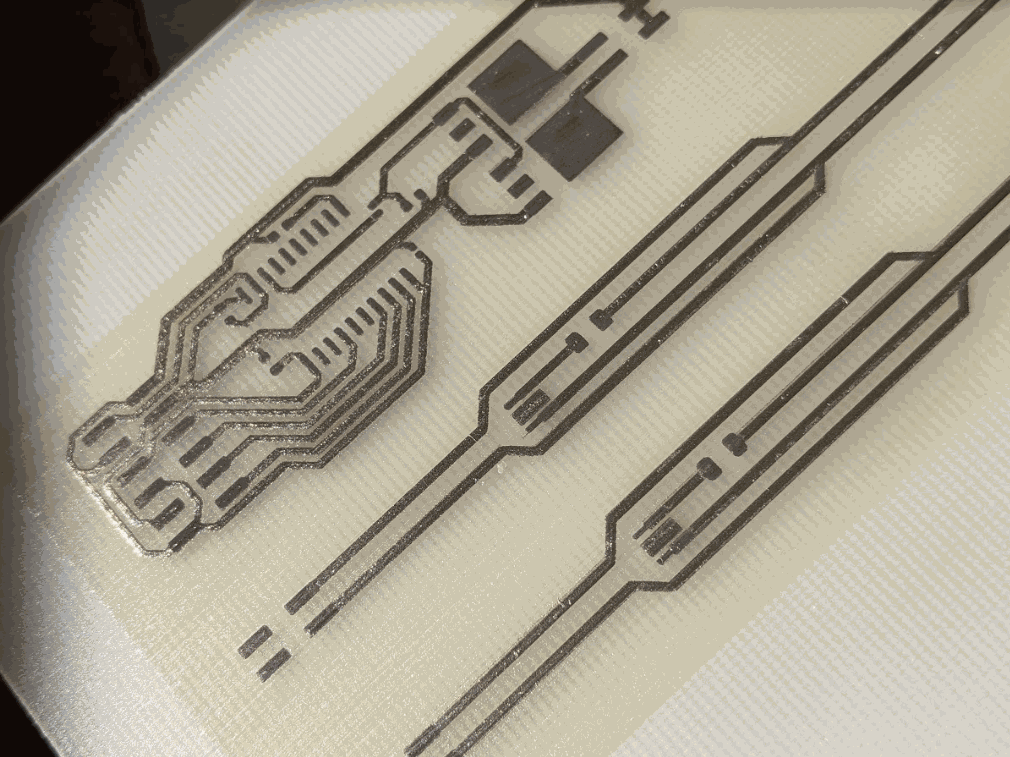 After redesigning his PCB, this iteration of the circuit board allowed him to spot a change that would make his design both simpler and more robust. He re-worked his design and printed out another version, this time using the footprint of a smaller microcontroller. See below for the equivalent of a CompactFlash memory card getting replaced by a MicroSD card, one step closer to Skynet-level germ eradication. 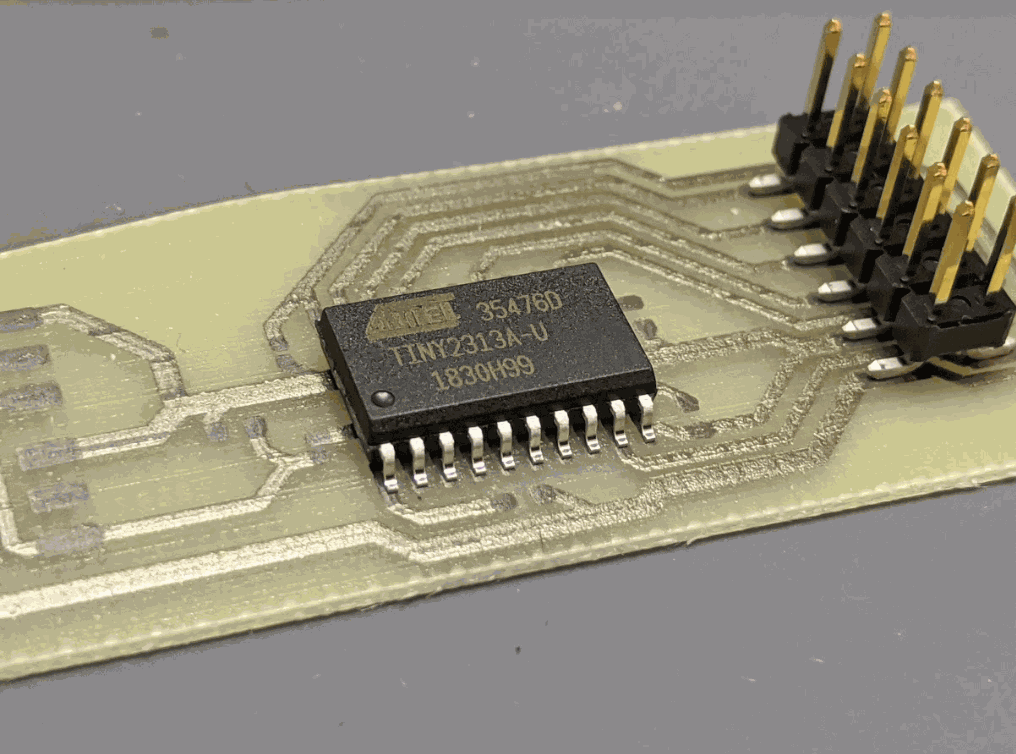 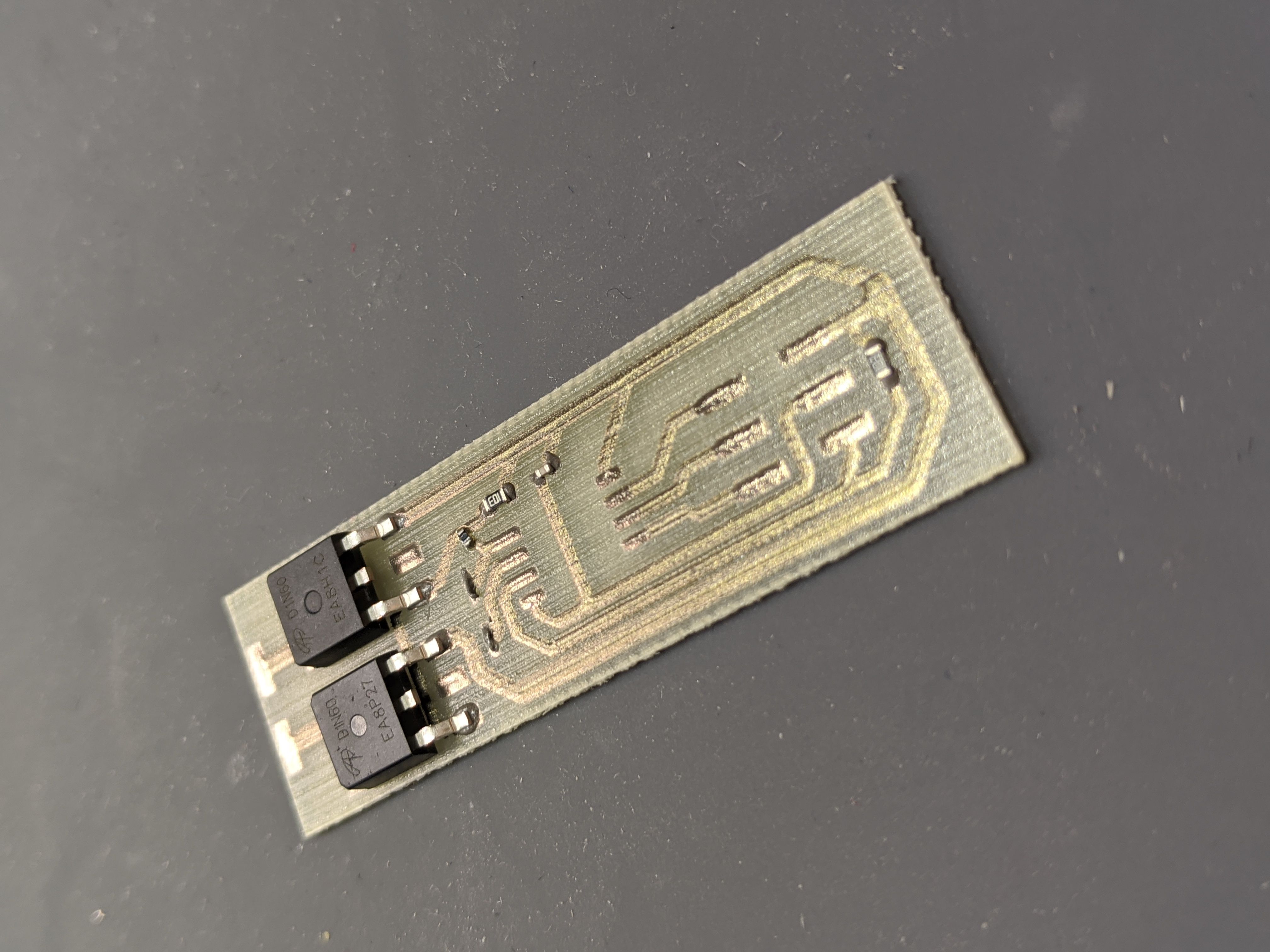 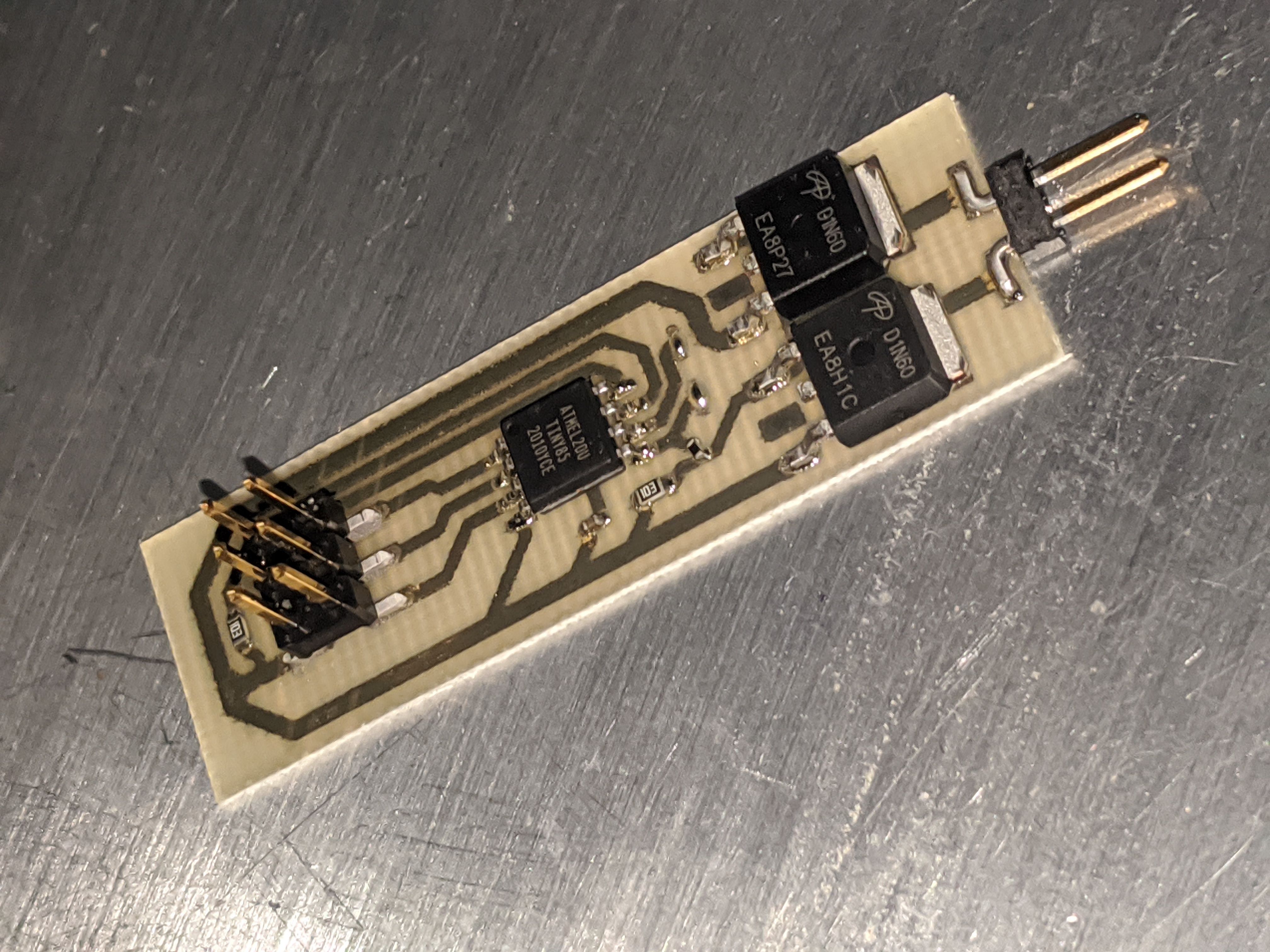 Want to Make Your Own UV Sanitizer?

The design Md settled on consisted of three separate PCBs, with the main one containing an SOIC ATTINY85 microcontroller. The SOIC ATTINY85 would be the brain of his UV sanitizer. It would receive all inputs and send out all outputs needed to get the microbe/coronavirus-killing photon blaster up to Md’s lethal standards. The other two PCBs contained the UV LED arrays. 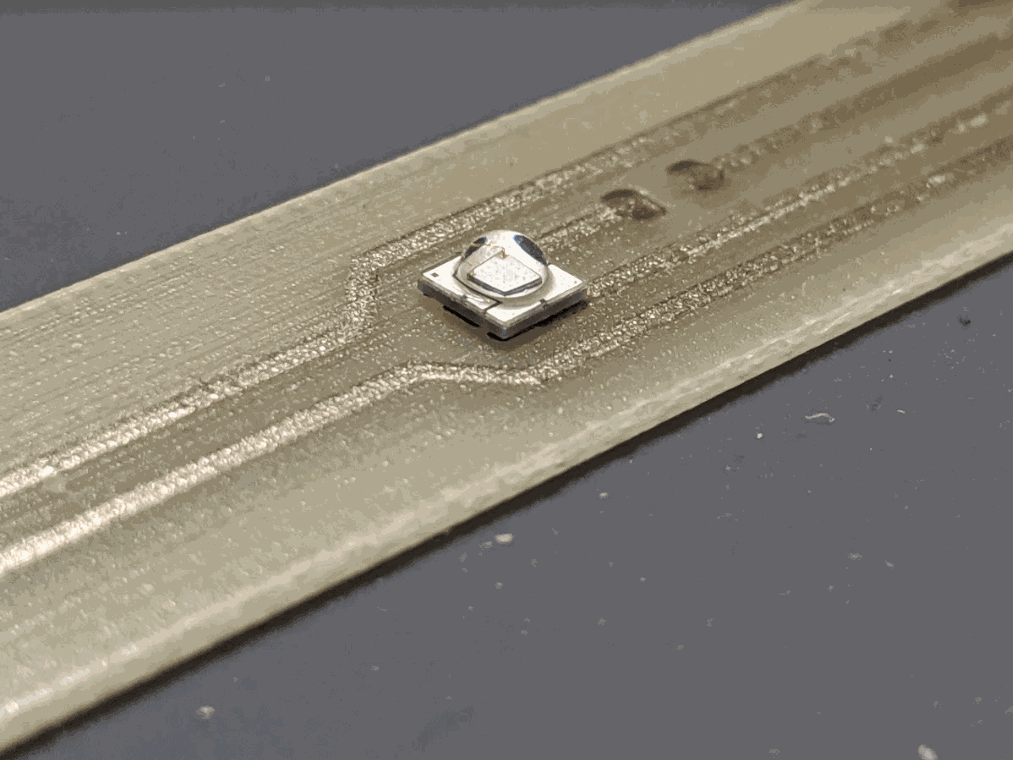 The fundamental behavior of the UV sanitizer is very straight-forward and intuitive. The user presses a button to turn on the UV LEDs/sanitizing radiation. The microcontroller keeps the UV LEDs on for five minutes and displays the time remaining on a 7-segment display. The 7-segment display counts down the five minute death sentence of any germs caught by the UV LEDs light. Once the timer counts down to 0, the 7-segment display shuts down, along with the UV LEDs. The entire circuit can be powered by a common 9V/2A power supply through the board’s barrel jack connector. Simply attach an AC adapter and voilà: a powered virus killing machine! 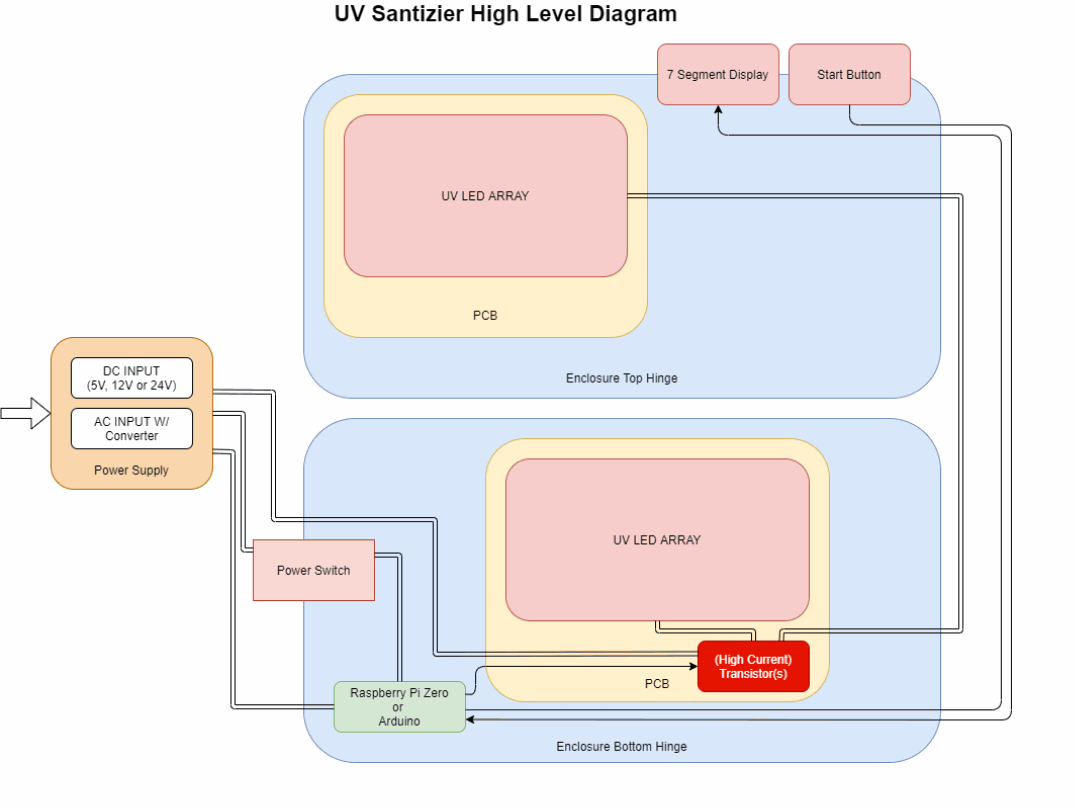 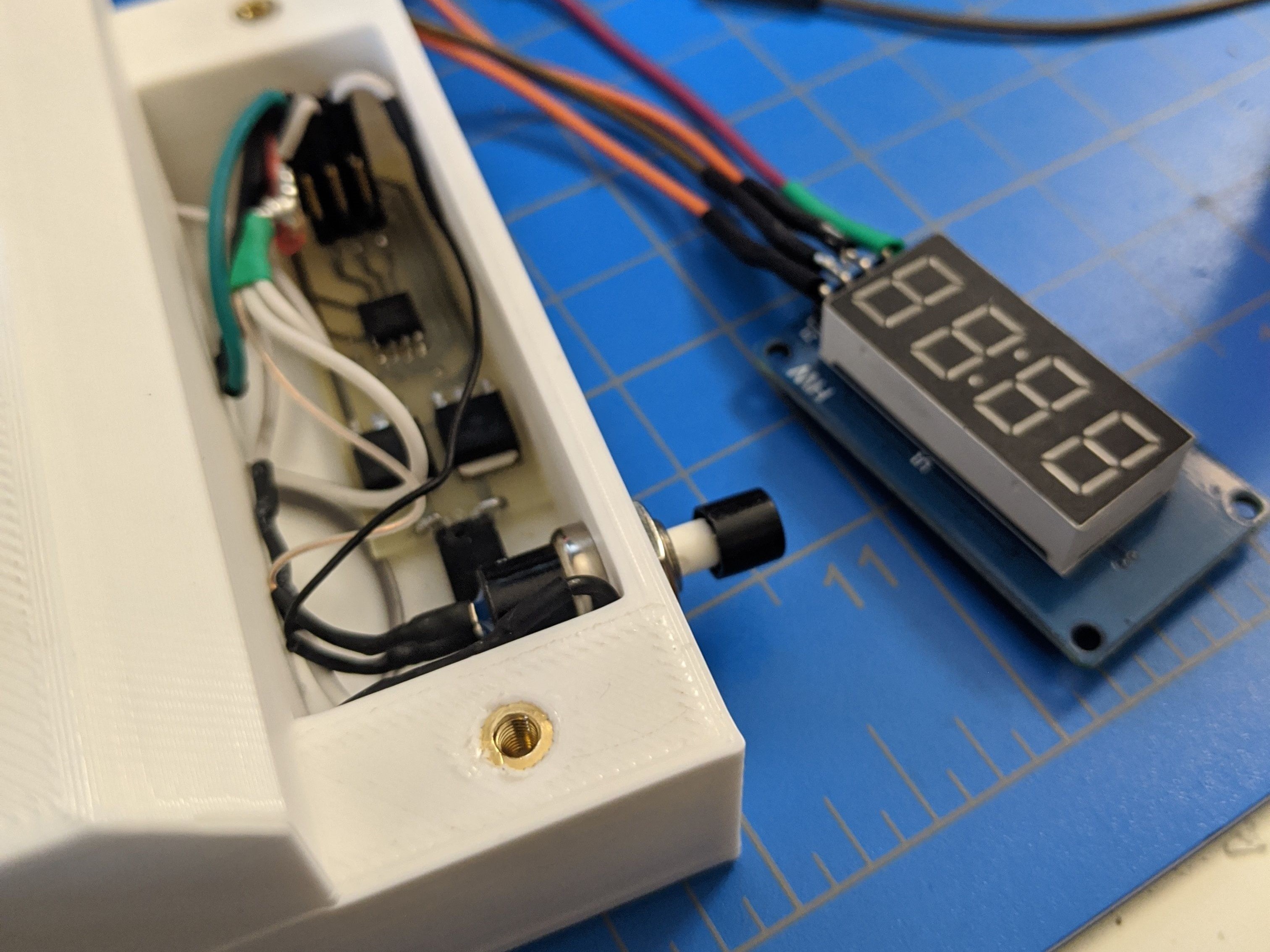 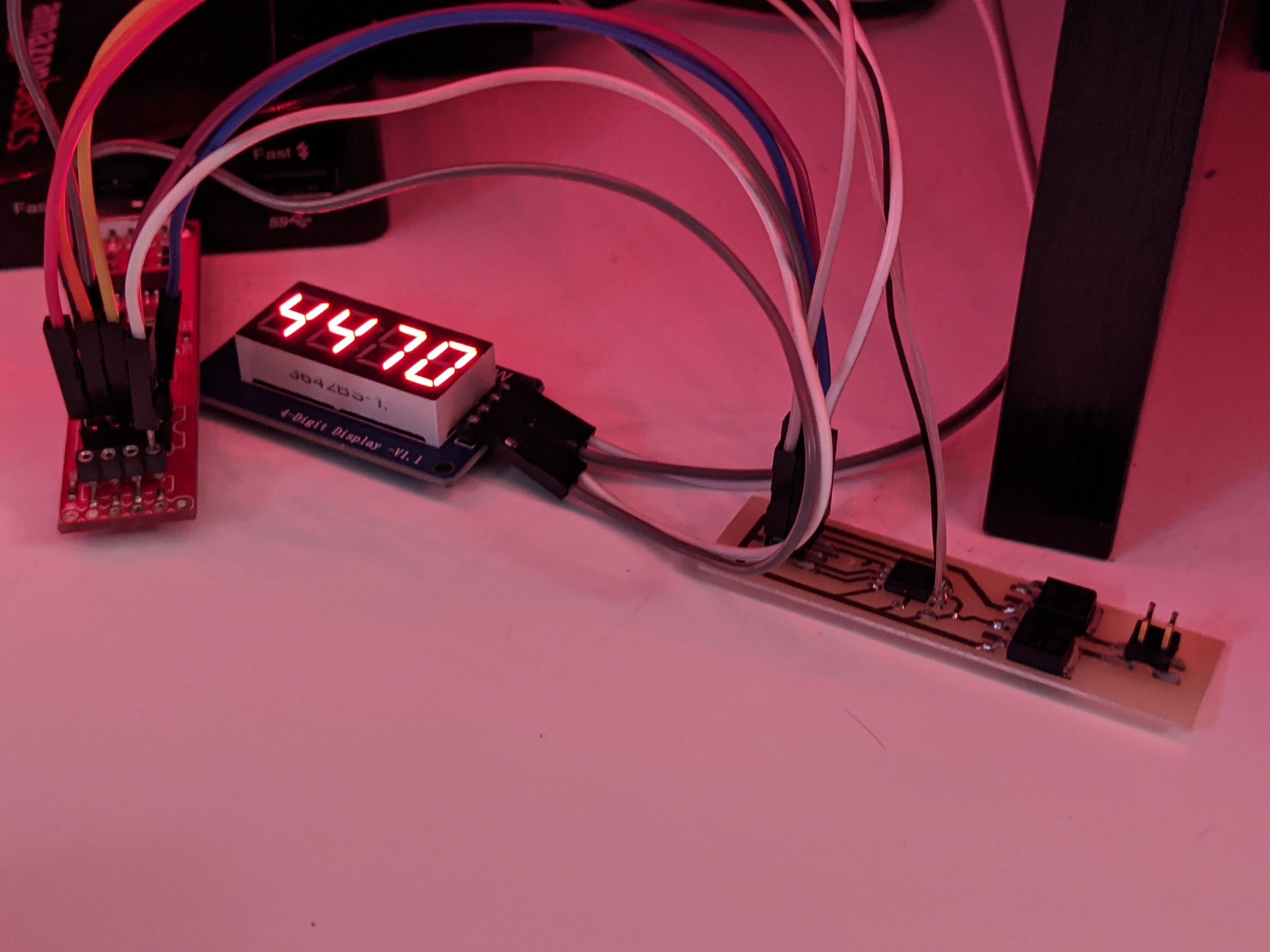 Md’s utilization of low volume production techniques and the appropriate prototyping tools allowed him to create a UV sanitizer in a span of hours, in his home no less. He didn’t have to risk: riding the NYC subways, getting COVID-19, getting arrested for breaking into his locked down office, or running into other humans (Ew!). Like all proper evil geniuses, he had the power to build his death ray in his home without leaving the comfort of his room. He was able to create a full device, iterate, and refine his concept not five feet from his bed. UV sanitizers similar to the one Md produced are sold for around $70, while the one Md made cost him 3 easy payments of $11.99 *plus shipping and handling. Had Md gone through the traditional route of hardware design, he would still be waiting to receive cheap-but-slow PCBs from China. He would have also found that his board needed to be reworked and a second order would have been placed for the revised board and he would not have bothered with the improvements to make a 3rd one. 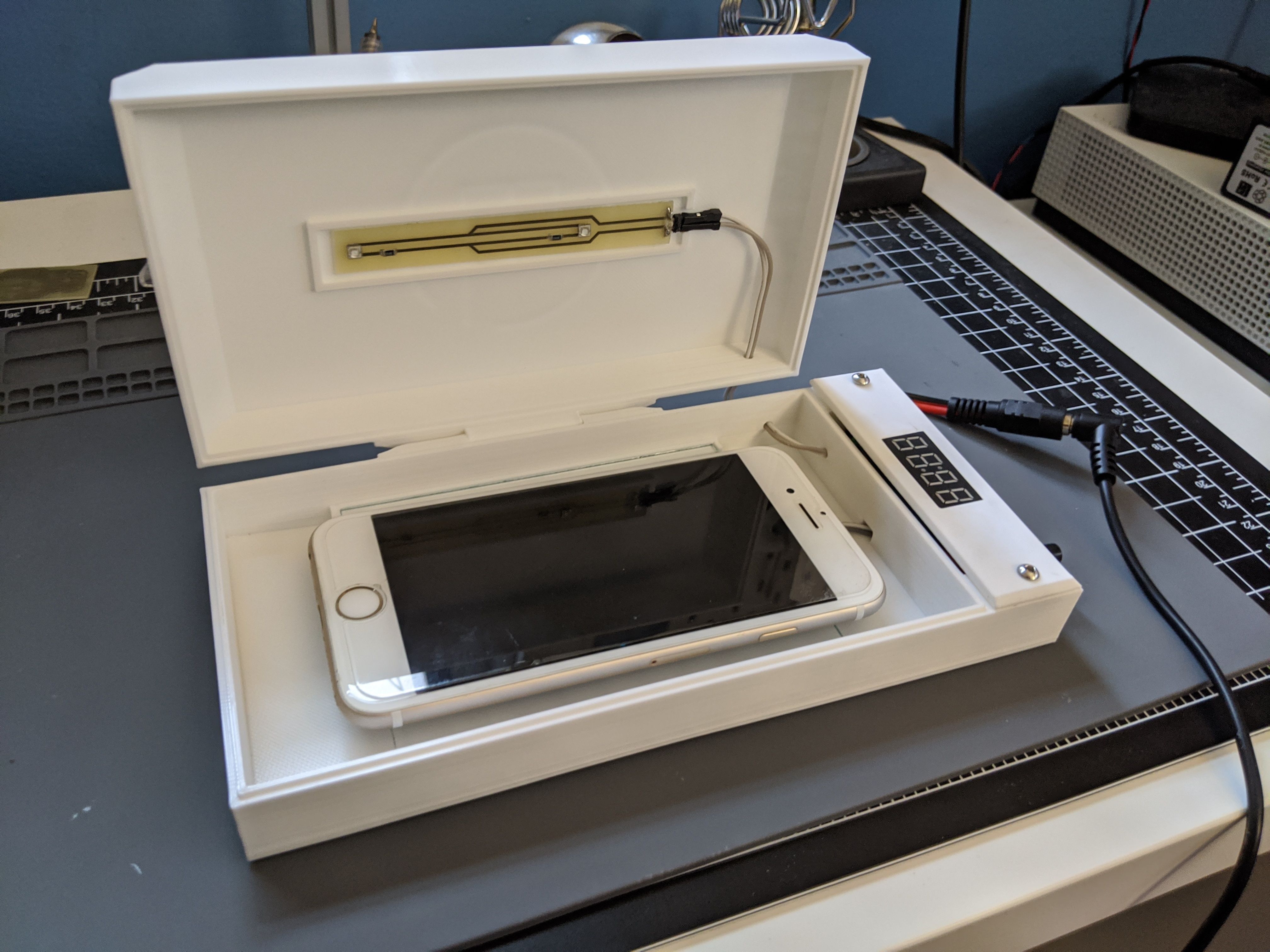 The enclosure was designed by Md using Fusion360, and was envisioned as a simple and ubiquitous clamshell enclosure. The case was designed in three pieces, the bottom half, the top half, and the cover for where the main PCB is placed. The top and bottom half both have cutouts for where the UV LED arrays fit in snugly. Holes were also worked into the design in order to allow proper routing of the cables connecting the different PCBs. Md utilized 22 gauge jumper cables for the connections between the circuit boards, but he could have also chosen to print a connecting board with SV2 on a flexible substrate such as Kapton. Md used his 3D printer to print the enclosure while simultaneously printing his PCBs on his SV2. According to Md, “this made the prototyping process exponentially faster.”

After the prints were completed, all the parts were assembled in the enclosure and the device was tested. Md had successfully produced his very own UV sanitizer in a few hours at home! “Hey dad, you just put your phone in here and then press this button, once the timer reaches zero all the viruses will be gone,” said Md as he handed the UV sanitizer to his father. “Okay let me try it! ... Hey! It still says I have a virus when I open my email,” said Md’s father. Md and his father both looked at each other, finally understanding why the other looked so puzzled a few hours back. While the UV sanitizer can’t get rid of malware from your electronics, it can sanitize the belongings you carry on a daily basis, such as keys, phones, and wallets without the need of disinfecting products. With the global pandemic taking place, the need to diversify manufacturing options is more than apparent. Whether it’s at home or in the office, having an in-house lab set up to develop projects and experiments greatly decreases delays and increases productivity. Designs made by innovative and creative engineers can easily come to life given the proper tools and resources, and BotFactory’s engineers strive to prove that.

Remotely Control Devices Through Any Browser